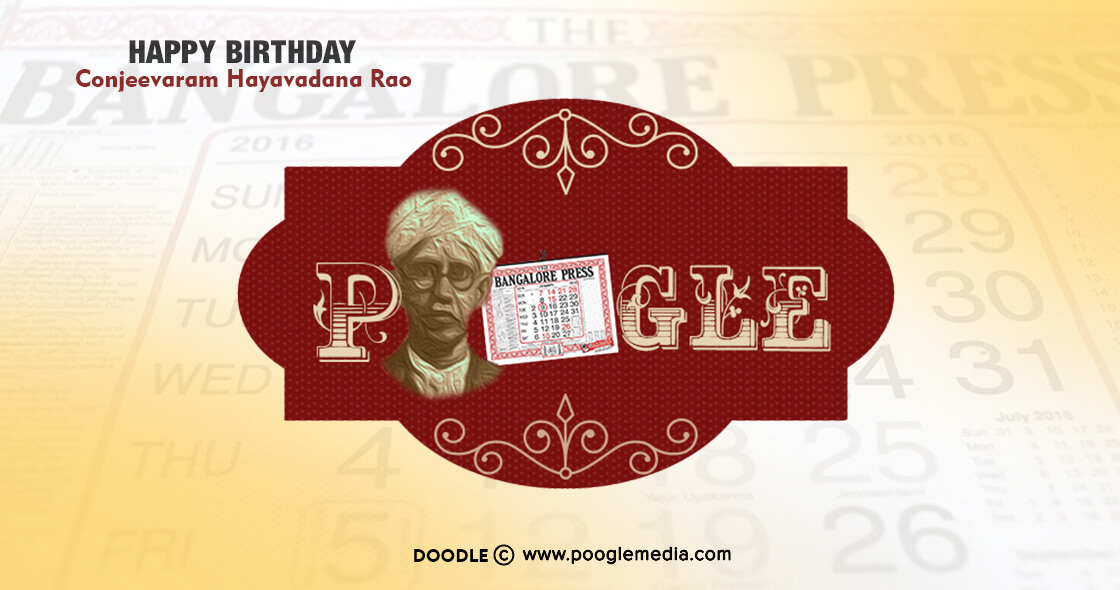 In 1924, Rao was appointed the head of a committee formed to revise B L Rice’s famous Mysore State Gazetteer. Rao helped in revising it and republished as a seven-volume set in 1927. Rao also authored History of Mysore chronicling the Wodeyar Dynasty. A versatile genius that he was, Rao was a member of several prestigious institutions like the Royal Anthropological Institute, Indian Historical Records Commission and a fellow of the Royal Society of Economics. Surrounded by such stalwarts the erstwhile king and his kingdom flourished with prosperity.

In 1912 the Maharaja on his trip to London was curious to find out what it would take to print wedding invitation cards. On the advice of his loyal ministers and inner circle, he was told he could establish his own press back home in Mysore. And that is how The Bangalore Press was born on 5th August 1916.

This year, particularly this weekend, it celebrates its birth centenary! Five years later they printed their first calendar. These calendars were to soon be the most wanted ones in the market and slowly have a cult following over the decades. So what was it about this calendar that was so different from the rest?

For the first time a comprehensive English language calendar was ever printed anywhere in India that catered to all citizens alike. After consulting the best of Hindu and Muslim astrologers, scholars in astronomy and allied fields, dates were drawn out according to both the almanacs.

Sticking to simple colour scheme and design, the calendar has remained the same for the last century. Printed in black, red and gray colours on a white paper, the calendar is an easy read for everyone. The traditional Hindu dates on the calendar mention both the Sowramana (solar) and Chandramana (lunar) cycles, neatly laid out in columns. In addition to this is the Muhammadan calendar that lists out the months of the Islamic year. A quick reference column helps you navigate the rest of the month with special symbols.

Ekadashi with an image of a plate of food crossed out as many devout Hindus observe a fast, Pournami with a full moon, Amavasya with a black dot to signify no moon, G for general holiday, R for restricted holiday, J for Jayanthi, MR for moon rise and so forth.

These symbols are attested as per the days they occur in, on the rest of the calendar grid. A separate column indicates the hours of the day that have been designated as auspicious and inauspicious like Rahu Kalam, Gulika Kalam and so forth. In four corners of the calendar are portraits of the four visionaries who established The Bangalore Press.

The calendar is prepared with much care, year after year. In the last hundred years, not a single mistake has occurred! The confidence that people invest in the calendar is high and they have never been disappointed. It might have been the untiring work of those four visionaries who knew how useful a tool this would be in the following decades.

The calendar is usually out in the last quarter of the year and can be seen sold at all major traffic signals in Bangalore. It is also sold in a much-abridged version as a desktop form. Everyone who has lived in the garden city would have encountered this calendar at least once in his or her life.

There are those who swear by it and many NRIs who visit India during winter vacations keep it as a ‘must buy’ on their list. There are fans who have been collecting and filing these calendars for decades now! Just browsing through its archives is a lesson in history by itself.

In this day and age, when consulting calendars seems like an old world idea, just like wearing a simple wrist watch has become, The Bangalore Press prints their calendars with the same accuracy as they did a hundred years ago. They do it, almost as a public service. As The Bangalore Press embarks on their birth centenary celebrations this weekend, we wish them many more centuries of continued service!

Rao Bahadur Conjeevaram Hayavadana Rao (10 July 1865 – 27 January 1946) was an Indian historian, museologist, anthropologist, economist and polyglot. He was a member of the Royal Anthropological Institute, Indian Historical Records Commission and a fellow of the Royal Society of Economics.

Hayavadana Rao was born on 10 July 1865 in the town of Hosur in the then Salem district of Madras Presidency in a Kannada-speaking Deshastha Madhwa Brahmin family.[1] After graduating in history, Rao studied law and economics and joined the Government Museum, Madras as a curator. Rao worked as a curator till his retirement and compiled "The Indian Biographical Dictionary". Rao was a polyglot and was fluent in English, Latin, French, German, Kannada, Tamil, Telugu, Marathi and Sanskrit.

In 1924, Rao was appointed the head of a committee formed to revise the Mysore Gazetteer written by B. L. Rice. The revised version comprising seven volumes was published in 1927. Rao followed this with a three-volume History of Mysore (1399-1799) chronicling the Wodeyar Dynasty.

Writing off from the desk of Poogle between the fun at work and zillion cups of Coffee! Share the creative bombs & forget not to subscribe to our awesome and saucy news!